Reflection seismic is currently the primary geophysical technique in onshore exploration for natural resources, particularly in geological settings where the subsurface is characterized by a flat to moderately dipping ‘layer cake’ stratigraphy. Under the right circumstances, the image of the deep subsurface provided by seismic reflection is both clearer and more detailed than what can be achieved with other geophysical methods. Yet there are still significant challenges during acquisition, processing and interpretation of land seismic data, which influence the quality of both data and interpretations.

To help improve the understanding of the subsurface, Remote Sensing data (RS data) can provide information that is useful at different stages of the lifecycle of land seismic reflection data:

The focus of this article is on geological mapping of RS data to provide an accurate characterization of the near-surface layer, and use this information for the (re)processing of seismic reflection data.

As figure 1 shows, the acquisition of a land seismic survey leaves marks behind at the surface, which are visible from space. The image shows part of Egypt’s Western Desert, where a seismic survey was acquired along a grid of N-S and E-W oriented lines. If, at the beginning of a reprocessing project, uncertainty exists about the geographical details of the survey, RS data can help determine this information. As long as the acquisition dates are known, the exact location of seismic lines and the approximate elevation values of shots and receivers can be extracted. Archives of satellite data go back to the 1970s, and archives of aerial photos go back even further.

Figure 1: Western Desert – Egypt – showing the N-S and E-W oriented lines of a grid left behind by a seismic survey. (Data: Sentinel-2)

Variations in the Near-Surface

Besides the acquisition grid, the image of the Western Desert also shows significant variations in the surface geology (figure 1). The same tectonic activity that leads to the formation of petroleum systems, causes the near-surface to be made up of a variety of different lithologies and geomorphological landforms. In most onshore regions, the surface geology is characterized by a combination of erosional areas, with relatively old, hard rocks in outcrop, and sedimentary areas, where relatively young, unconsolidated sediments cover the older, underlying strata (figure 2). The transitions between these areas can either be sharp boundaries (for example a fault that juxtaposes old rocks against unconsolidated sediments) or gradual shifts (e.g. an alluvial fan with conglomerates and gravels near steep slopes, shifting into finer grained deposits in the distal parts).

Other factors, such as intensity of weathering, differential compaction of recent sediments and the depth of the water column, further impact the complexity of the near-surface. This complexity is reflected in steep gradients in the physical properties of the shallow subsurface, both vertically and laterally. These properties include density and elastic properties, which largely determine seismic velocities. Thus, the high level of complexity of the near-surface geology causes significant lateral and vertical variations in seismic velocities, and affects the propagation of seismic waves. It is therefore important to have accurate information about this heterogeneous part of the rock column, during seismic processing. 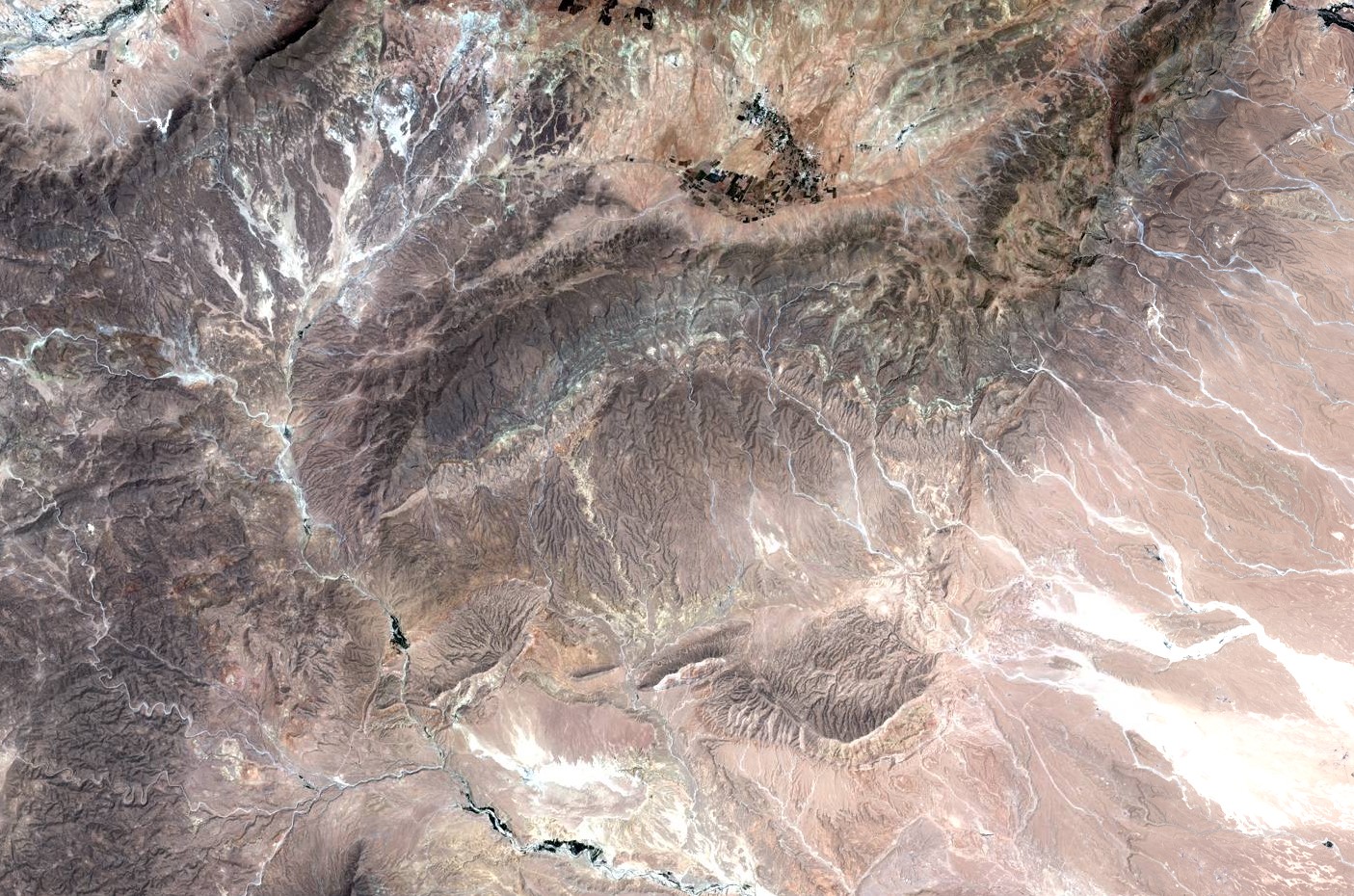 The near-surface geology is sometimes referred to as the ‘weathered layer’ by geophysicists, even though it doesn’t necessarily coincide with the depth of geological weathering. While poor knowledge of the shallow geology is detrimental to seismic imaging of the geology at depth, current practices for understanding near-surface anomalies are generally limited to extracting information from seismic methods. These methods include shallow seismic refraction methods (such as first arrival tomography – Zhu et al., 1999), uphole velocity measurements, surface wave inversions and measurements of the stiffness and viscosity of the ground (figure 5 – Ley et al., 2006). These methods provide useful information, but they have their limitations: all are based on seismic waves, or data from the acquisition itself, and the maximum number of datapoints is limited to shot and receiver points along the lines of the seismic grid, with no datapoints in between. It would be logical to complement these methods with other techniques suitable for the detection of variations in the near-surface, which are based on external sources of information, and integrate them into the seismic processing workflow.

One such technique is mapping the geology and geomorphology of the survey area with RS data. This works well because, besides seismic velocities, the lateral changes in lithologies in the near-surface are reflected in other physical properties as well. The terrain reflects some of these properties, which makes it possible to distinguish them in RS data (figure 2), both in elevation data and in imagery. Several examples of how the terrain reflects certain physical properties and their variations, and how these can be mapped with RS data: 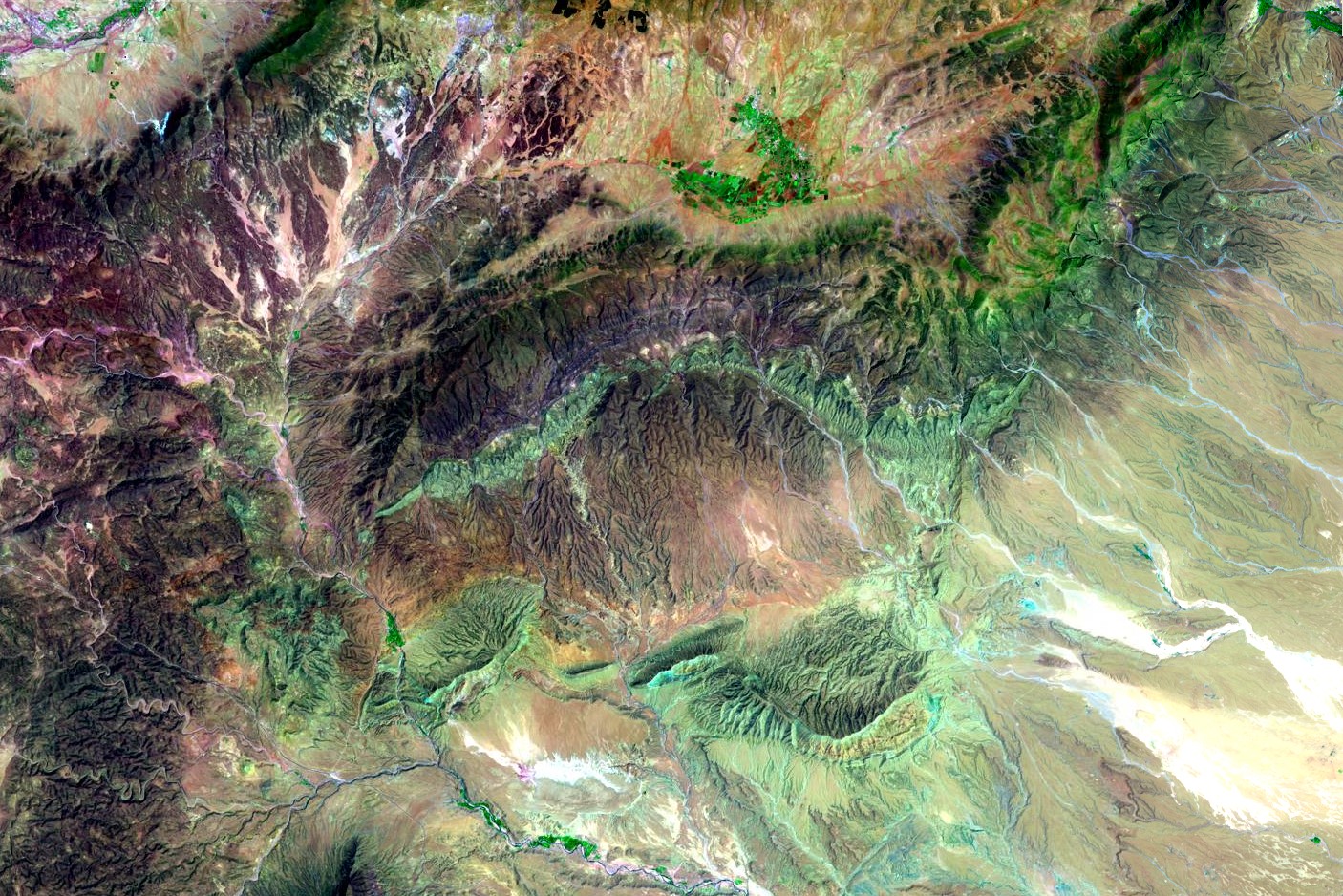 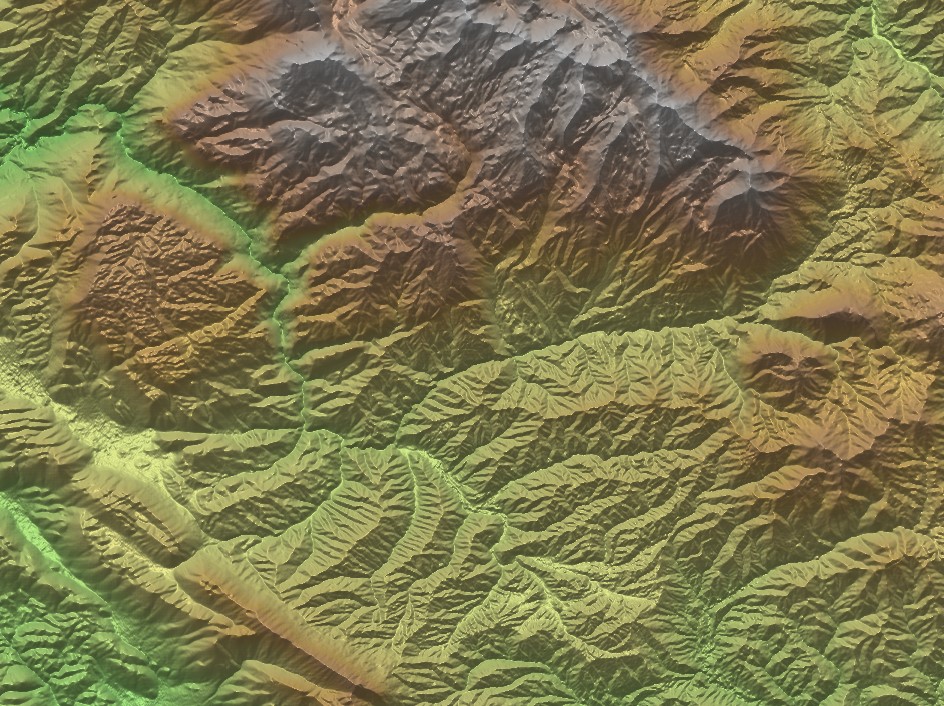 Figure 4: DEM of part of western Greece, showing differences in resistance against erosion of different lithologies throughout the area. The plateau in the central part of the northern half shows the typical morphology that results from the chemical weathering of massive limestones: rugged terrain, characterized by high altitudes in comparison with surroundings, steep slopes and relatively few river valleys. The area to the south shows the typical drainage pattern for more erosion resistant siliciclastic lithologies: lower altitudes, more gradual slope angles, and well-developed drainage patterns with many small streams in multiple directions, draining into bigger rivers. (Data: AW3D30)

An accurate interpretation of variations in the surface geology and terrain characteristics before starting the processing of seismic data allows for a better understanding of the seismic records, and their quality throughout the surveyed area, during the processing. Recognizing variations in the near-surface makes it possible to correct for the distortions caused by lateral and vertical gradients in seismic velocities in this shallow part of the rock column. This has a whole range of benefits during processing, including the following: 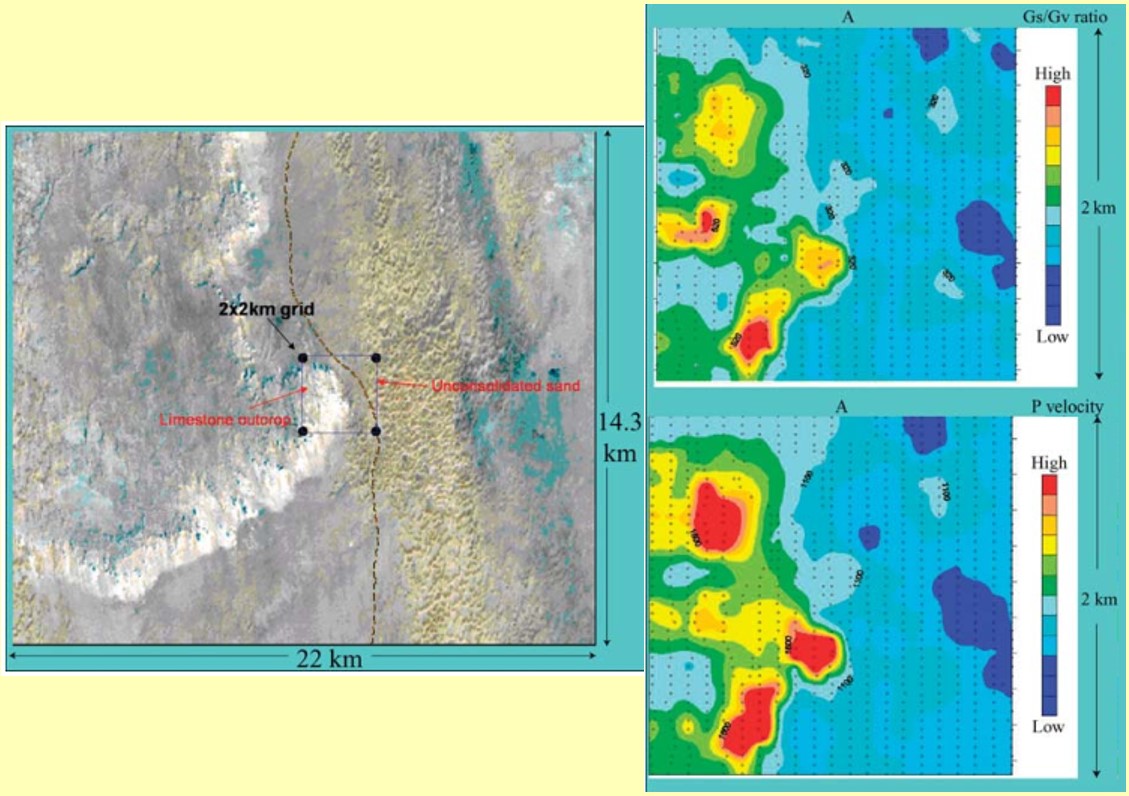 Figure 5: Images from Ley et al., 2006, showing ground stiffness/viscosity ratio, from data recorded by a vibroseis control system, and P-wave velocity over a 2 x 2 km area in Saudi Arabia. The surface geology is characterized by outcropping limestones (Jebel) in the W, and unconsolidated sand (dunes) overlying flat sabkha deposits in the E

While the use of RS datasets to increase understanding of the near-surface is useful across different climates, this methodology is particularly beneficial in dry, arid areas (e.g. Middle East, North Africa, Neuquén Basin in Argentina). In such non-vegetated regions, low water content in the near-surface reduces the strength of the seismic signal. Yet due the lack of vegetation the surface geology is very well exposed and visible on RS data (figure 3), which makes it easier to accurately characterize the near-surface. A further effect of the absence of vegetation is the lack of soil development, which increases the presence of hard ground at the surface, and with it the likelihood of surface-related noise and multiples, when compared with soft ground in vegetated areas where soil has developed (Vestrum & Gittins, 2015). In humid regions a similar effect occurs where massive limestones are exposed at surface and soil development happens much slower than over most siliciclastic lithologies (figure 6). Combine this with the detrimental effect of karstification on seismic data and it becomes clear why it is so hard to acquire good quality seismic data in PNG and parts of Indonesia, and other parts of the world with significant amounts of limestones at surface. 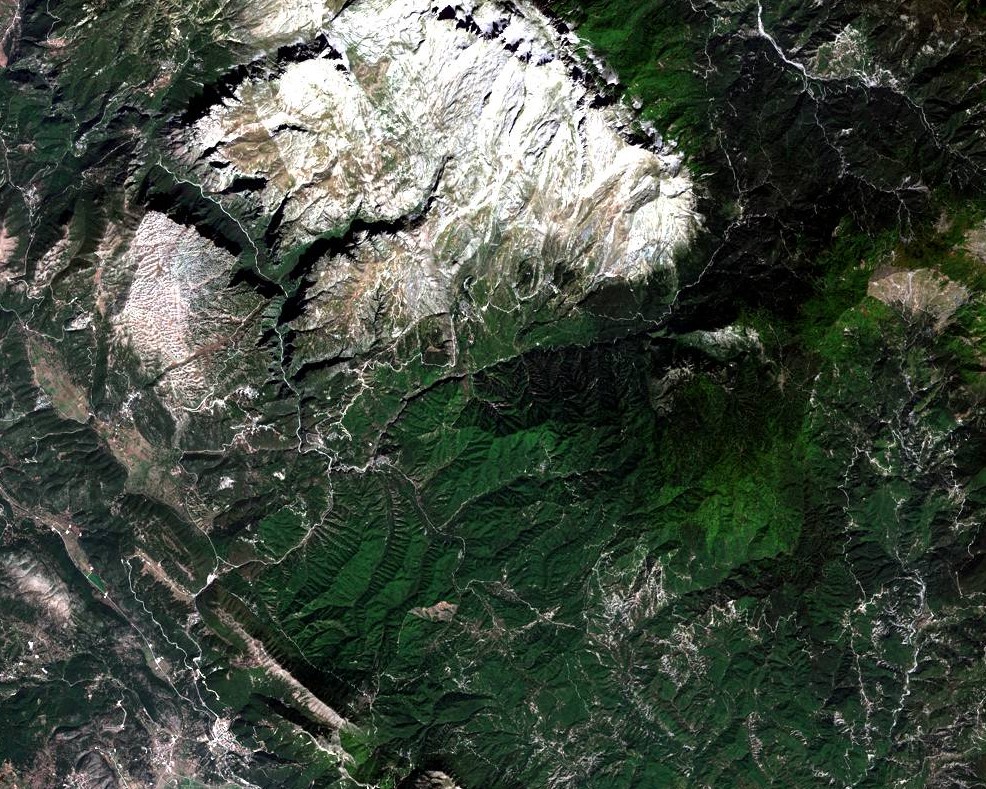 Figure 6: Western Greece – natural colour imagery over the same area as figure 4. Clear difference in soil development and vegetation density between the limestone plateau in the north, and the areas of siliciclastic rocks south of it. (Data: Sentinel-2, bands 4, 3 & 2 as RGB)

Above ground effects to seismic signal

Besides the previously described causes of anomalies in seismic amplitudes below the surface, there are above ground reasons for noise as well (figure 7). Many sources of noise are the result of human activities, such as the presence of roads, pipelines, powerlines and other infrastructure, or activities that increase the water content in the near-surface in otherwise dry areas, such as irrigation (figure 8). The visibility of these features on satellite imagery enables a quick understanding of localized noise and amplitude changes in the unprocessed data. Early detection of sources of seismic noise is beneficial during processing projects, and another good reason to use information derived from satellite data throughout the processing workflow of land seismic data.

Figure 7: Processes altering seismic amplitudes, many of which originate in the near-surface, or above the ground. From: Reynolds, 1998 – courtesy of BP 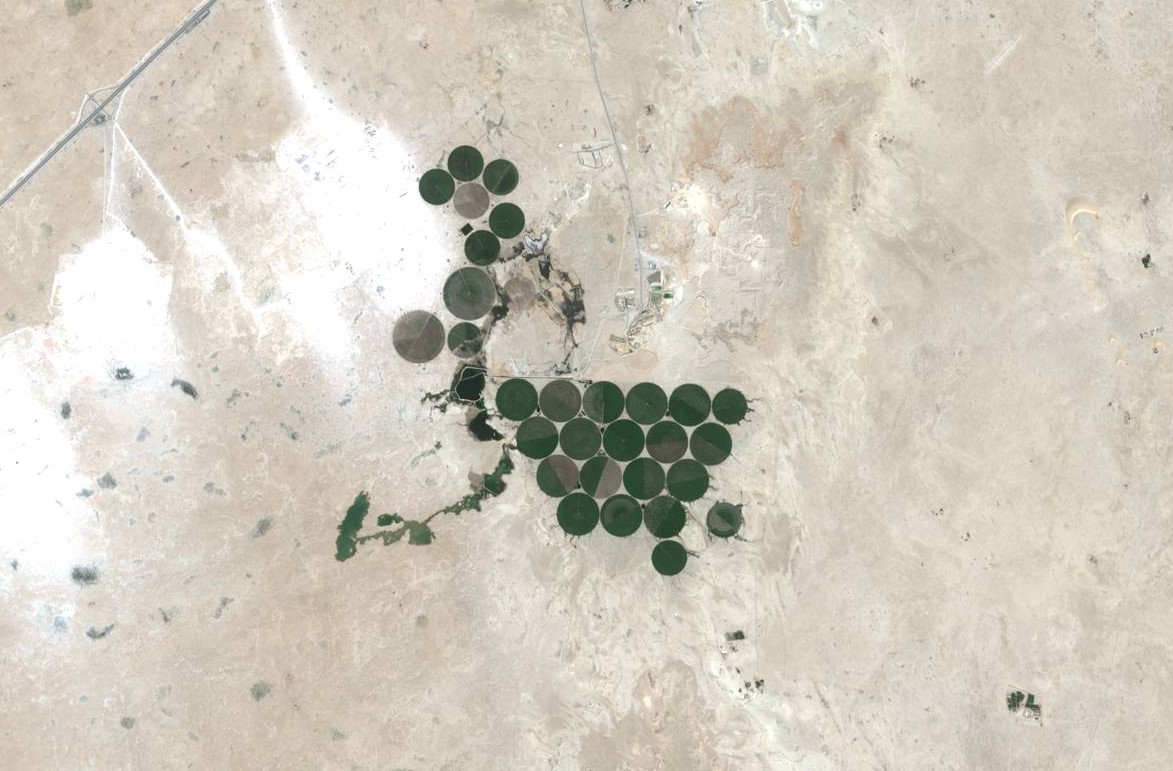 Figure 8: Central Qatar – Natural colour image showing typical round irrigated agricultural fields, common in dry regions around the world. Increased moisture in the near-surface as a result of irrigation leads to anomalously high seismic velocities below these fields, which results in pull-ups in the reflectors. (Data: Sentinel-2, bands 4, 3 & 2 as RGB)

Geological mapping with RS data for the processing of land seismic data leads to a better understanding of variations in the heterogeneous near-surface. The changes in physical properties that affect seismic velocities in the near-surface are often reflected in the terrain, and can therefore be mapped accurately by geologists that are experienced in working with RS data. Other information provided by the same datasets helps to quickly recognize above ground sources of noise. Incorporating this information into the seismic processing workflow will result in improved seismic data and a clearer image of the subsurface, which enables more accurate interpretations of the geological setting at depth. While useful in any climate, this is particularly beneficial in dry terrain, where the geology is much more exposed at surface, and the lack of soil development is detrimental to the seismic signal. A similar effect occurs over areas of massive limestone outcrops in vegetated terrain.

During onshore O&G exploration, some of the biggest expenses of the work program include the acquisition, processing and interpretation of seismic data. The current environment of constrained exploration capital is a good moment to look at alternative, inexpensive ways of improving the quality of seismic data, both during the processing of new, and the reprocessing of legacy seismic data. The method explained in this article will quickly help improve seismic data quality for a fraction of the cost of a typical (re)processing project, and seems like an obvious step forward.

A future article will focus on the use of geological mapping with RS data for seismic processing and interpretations specifically in fold and thrust belts.

Reynolds, J.M., 1998, An introduction to applied and environmental geophysics. Wiley

This article has also been published on LinkedIn.